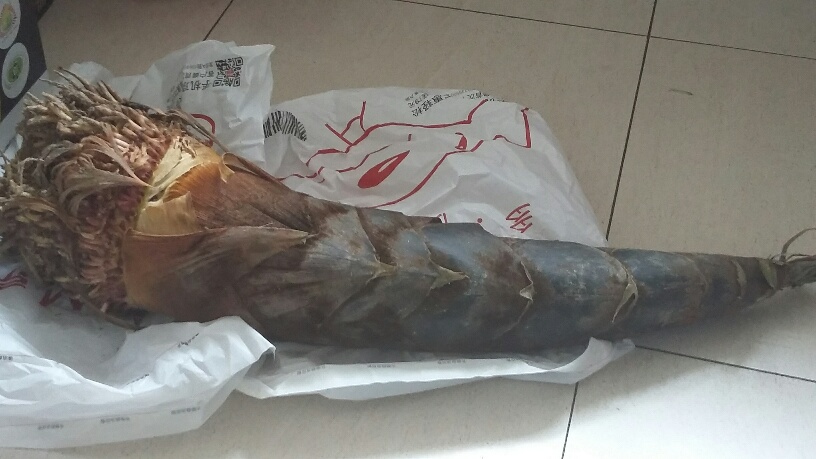 Hi!! How has your week been? Here in Shanghai, my schools had parent teacher conferences so I’ve been lounging around enjoying my long weekend. My mom and my brother, however, weren’t so sedentary. My brother is part of a club called Technovation Generation and they were on a charity trip to JiangXi to help set up a computer lab and library. (read more about the Charity here). When the got home last night, they brought back the usual load of dirty clothes, nice pictures, but also this… 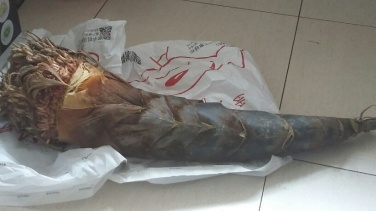 A nearly 10 kilo bamboo shoot….. that they dug themselves (with the help of some locals)

As you’ve probably guessed, this behemoth will end up on our dinner table.

Chinese people have been eating bamboo shoots for hundreds of years, and for good reason. They are low calorie, low fat as well as high in fiber, potassium and surprisingly high protein. (read more here). There are two types of bamboo shoots:

Winter Shoots (冬笋）- As the name suggests, this variety is harvested in winter, between November and January. Winter shoots are the shoots that haven’t sprouted yet, so they are tender and slightly sweet. They are fairly small, under 1 kilo and usually used in stir fries and soups.

Spring Shoots (春笋）- Bamboo shoots don’t stay in the ground forever, enter Spring shoots. They come into season from March to May. Since Spring shoots are more mature, they are much bigger, but also tougher and tend to be bitter if not cooked properly. Spring shoots are best left for pickling and soups.

Just like how most fruits need peeling, so do bamboo shoots. The skin forms layers around the edible core and has to be removed. Needless to say, big shoots have a lot of skin

Note: The edible part is also in layers, so to distinguish between the skin and meat, check for fuzz.

That’s the final product. Of course we couldn’t prepare the whole thing in 1 meal, so we broke it down and froze part of it. As for the parts we did cook, the shoot was pretty mature and tough and we had to steam it before cooking it. Then, we ate it…

So that’s it for this week. For more info about bamboo shoots I suggest watching A bite of China Season 1 episode 1, it provides an overview of both types and is very interesting. Bye!!!