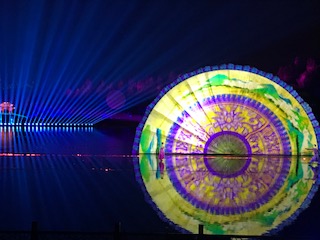 Hi!!! Last week, I said for the second time that I’d go to that historic teahouse, and guess what, I didn’t go… again. Well, my family ended up going somewhere with better tea and much better scenery. Yep, Hanghou, home of Longjing tea.

Unfortunately, tea season ended late April, but we didn’t miss out on much. Let’s get going!

We arrived at Hangzhou at 7:30 pm after a very quick ride on the Hi- Speed train. Honestly, it’s so convenient I can’t believe we don’t go more often. Normally, we would have headed straight to the hotel to chill, but our friends had other plans. They treated us to this:

West lake impressions is the original waterfront show. I’ve been to LiJiang impressions in Yunnan and Guilin impressions in… Guilin, but West Lake impressions was definitely the best. If any of the scenes look familiar, it’s because this show was featured at the G20 as well as the New Years Gala- it’s that good. Even the massive traffic jam on the way was totally worth it in the end.

First up, a boat tour of West lake. Our new friend (a Hangzhou local) had the boat guide go a special route through the middle of the lake and we got very up close and personal with the lotus flowers 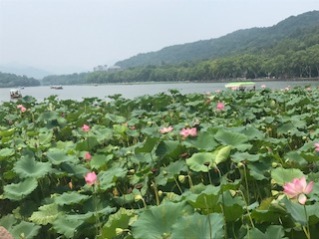 Sure the pictures are pretty, but there’s no comparison to the real deal!

Even better, the boat guide knew West Lake better than the back of his hand. He gave us the best explanations of every island, every building….

Culture break: West Lake’s most scenic strip (Su di) was once a dirty mosquito breeding ground. Well, in the late Song dynasty, beloved statesman Su Dong Po (the one with the braised pork) decided to change that situation. His plan: dredge the lake, use the extra mud to build a walkway and connect the lake to a nearby river. The project happened and behold:

Yep, there’s now modern amenities and a LOT more people, but the path is largely the same. Talk about history!

After two hours on the lake, the boat tour ended, but the culture didn’t. We stopped right at 茅家埠 (Maojiabu scenic area). None of us were that hungry, so we grabbed a quick drink, some fruit and ended up wandering straight into the former residence of 都锦生(Du Jin Sheng) aka the silk king.

Why silk king? Well, it started in 1918, when he was in Zhejiang Industrial University (the precursor to Zhejiang University). Instead of partying or burying himself in books, he started experimenting with silk. By 1922, he discovered a technique that allowed weavers to change color instantaneously, meaning they could create works like this:

If you told me that were paintings, I’d be mindblown, but these are all silk weavings!

If that wasn’t impressive enough, he had the business sense to get a patent (remember, 99.9% people in China, even the educated, didn’t know that intellectual property rights existed) and set up shop. Not surprisingly, business exploded. He quickly became the biggest silk retailer in the country.

Unfortunately, all the post 20’s political turmoil destroyed most of the business and him (stroke at 45!), but the legacy lives on big time.

His works have been and are still prized today as national treasures. In fact, both Stalin and Gorbachev got one as a symbol of Sino- Soviet friendship (in totally different contexts though).

For those not willing to fork over a couple (tens/ hundreds) of thousands on a piece, his flagship store still sells a wide variety of intricate silk products from umbrellas to nightgowns.

Scenery. Check. Culture. Check. All that’s missing is the food. Well, that will have to wait for tomorrow’s post! Until then, bye!