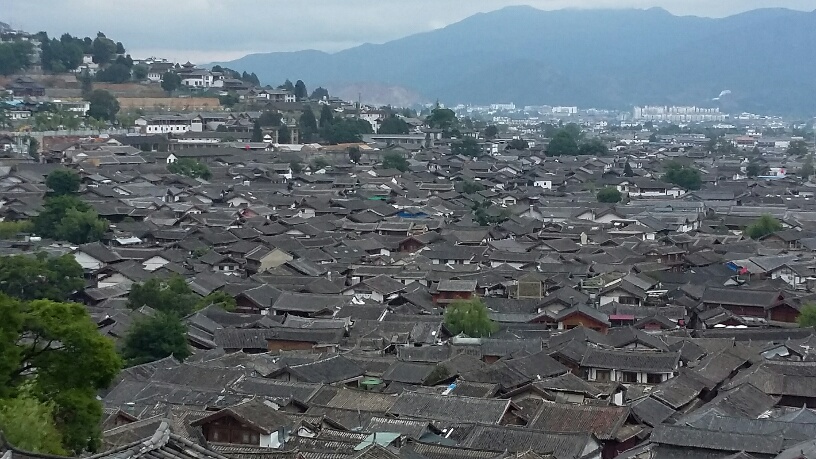 Hi!!! I’m back in Shanghai after visiting 2 of the most beautiful places EVER!!!!! LiJiang and Shangri- La (the place, not the hotel). Why was I traveling with exams two weeks away? Well, this was a school trip. My school has a program called China Alive in which  students go to some place in China for a week to learn more about culture. Each grade has 4-5 trips and 24 of my classmates and  I choose the one to LiJiang and Shangri- La. It was a trip filled with amazing culture, fun, great food and lots of yaks!!!. There’s too much for 1 post so part one will be about LiJiang

Lijiang is a historic and small city (less than 1.5mil people) in Northwestern Yunnan province. It’s located on the border between Sichuan and the Tibetan Plateau and is a bit more than 2,000m above sea level. It was first built nearly 800 years ago as a busy trading town that brought tea to the plateau in exchange for animal products but is now a tourism center. Essentially, its a beautiful place with a ton of history. For more information read here. Enough with the history… onto the highlights!!!!!

Old Town is undoubtedly best and the most famous part of Lijiang. It was the original LiJiang, built hundreds of years ago. Of course, the place has changed dramatically, but it still feels pretty traditional. The buildings are pretty old and a lot of the locals are still wearing traditional dress. 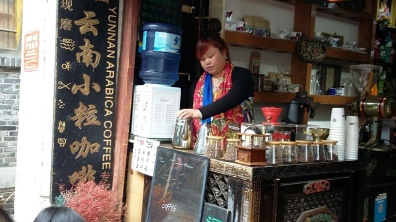 The teachers gave us 2 hours to explore the place. It was AWESOME!!!!!! Here are some pics 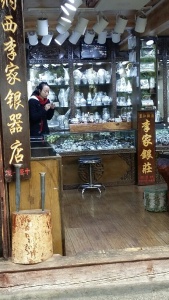 Yunnan has large silver deposits so we saw plenty of silver shops. Most places actually smelt their own silver which is pretty cool. These shops are cool for getting small gifts, but for the good stuff, you should probably go to an official one with a government label. 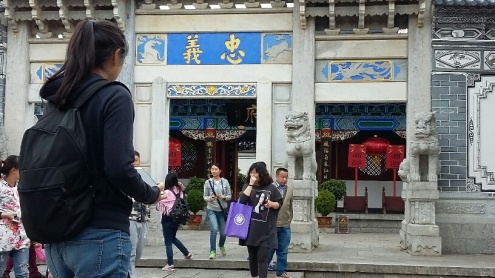 This is Mu Mansion, LiJiang’s forbidden city. This is where the old NaXi (the minority that makes up 58% of LiJiang’s population) king of LiJiang lived.

Of course, various food stalls, cafes and such….. more on that later.

The purpose of China Alive is to learn about culture. While Old Town is full of culture, no one really learned that much from shopping and bargining. Hence, Impression LiJiang- a 65 min. show depicting the lives and culture of the minorities. Unfortunately, we sat at the back so the pictures aren’t that great. I still got some though

The show is divided into three parts. The first part depicts LiJiang’s origins as a trading center, the second shows some local culture like their love of drinking. This second part is also quite sad since it talks about couples committing suicide if they can’t marry. The third and final part goes through the religion.

It was spectacular and quite interactive since the actors came up into the stands. The best part was the last part in which hundreds of men came out to drum as part of a religious demonstration. I loved the show.

Caveat: The show is quite expensive to attend. Tickets cost 234rmb/person plus another 180rmb to enter the park in which it is held along with an additional 80rmb conservation fee.

The food was probably a, if not the highlight of the trip. Everything there was just so fresh and delicious. The official meals were great, but they were nothing compared to the “snacks”.

Flower Pastries– These little pastries are ubiqitous in LiJiang. There were shops selling these babies at literally every corner in Old Town. These are rich flaky pastries filled with candied wild flower petals. I don’t have a sweet tooth so I found them a bit sweet, but my mom and classmates loved them. Definitely worth trying 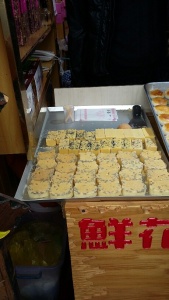 Yak Cheese Cakes– Yaks are basically the cows of the highlands. Yunnan people were originally nomadic herders, so not surprisingly, they have all things yak. Yak Cheese cakes are basically soft yak cheese mixed with some flour and dried. There were 5-6 flavors, but I opted for the original. It tasted slightly sweet and crumbly, like shortbread. I actually liked this more than the flower pastries. These actually took some searching.

For something more sit down style, there were plenty of “food courts”. These had a variety of classic street food ranging from yak kebabs (must try) to noodles. My favorite was wild  mushroom with quail egg

Yunnan is famous for its mushrooms so my expectations were pretty high. It exceed all expectations. However, it was quite expensive- 35rmb for 1. The other foods were also good. I tried Yak kebabs, squid sausage, grilled tofu and crickets. When it comes to street food, the best policy is just to try one of everything

Bridge Crossing Rice Noodles- This is probably the most famous dish in Yunnan. Obviously, the teachers and tour guide couldn’t let us miss out. We went to this nice little restaurant in old town to enjoy this delicacy and it was DELICIOUS- well most of it. The noodles were nothing special, but the broth was the bomb. On par with the broth were the beef balls  they put in. EAT THIS!!!!!!

So that’s it for LiJiang. I’ll be back with Shangri- La tomorrow. See you then!!!!