Hi!!!! Summer is pretty much (5days from) over so I’m back! For the most part, the summer has been pretty uneventful. However, last week, I went to Europe for the FIRST TIME!!!! We went to Munich and Vienna. We spent a total of  5 days there (3 for vienna and 2 for Munich) and had a blast, so here’s the scoop

Vienna is a cultured, beautiful and old city, which means there’s lots to see. Of course, we only had 2.25 days to spend there, so we had to choose wisely. Here’s what we did:

We arrived in Vienna at around 4 and by the time we got to the hotel, it was 5-ish. Obviously we couldn’t do much. The hotel happened to be in the city center so we walked around a bit

We also visited the Wiener Riesenrad, the ferris wheel pictured above. Apparently, it was built in 1805- pretty impressive if you ask me. It is in a park with a small amusement park. The amusement park is nothing much and tickets are crazy expensive, but it’s a nice place to walk around and take pics.

After dinner, we walked along the Danube river. It was almost 10pm when we got back to the hotel so we went straight to bed.

We essentially spent the entire day at the Schönbrunn Palace. The Schönbrunn palace, built starting in  1740, was the Hapsburg’s summer palace. As with most things Hapsburg, it was extravagant and beautiful. Aside from having over 1500 rooms, it also has a garden area bigger than the entire country of Monaco. We got to tour the main living quarters and got a lecture on the Hapsburgs. Unfortunately not photos were allowed

After the tour, we walked around part of the garden and toured the zoo. Fun Fact: The Schönbrunn zoo is the oldest zoo still open. It was clean, well organized and had cool displays. Many of the exhibits had “underground” passages so you could see the animals even it they weren’t outside. I forgot to take pictures though 😦

More touring- this time of the music industry… duhh. We would have to be stupid not to get a taste of Vienna’s music. On that day, we toured the Musikverin- aka home of the Golden hall (the one with the New Years concerts) 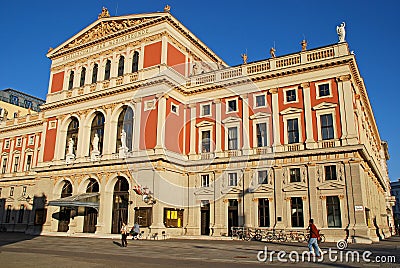 The tour was quite fun- we learned about the history and acoustics of the place. Fun fact: the place had a tight budget so all the fancy decorations are pretty much fake. As for the “gold” in the halls, the employees have to retouch it every 3-4 years with spray paint.

After a quick lunch, we toured the opera house

It was much more oppulent. Franz Joseph had it built in 1850 just to show off- he hated opera. The best part was probably seeing the backstage

July is their off- season, so most of it was closed, but I still liked it.

Did we stop there? NO! We headed straight for the Hofburg- the main palace

Well… sort of. The actual Hofburg was closed to touring so we looked around and went to  the plaza across the street where there were 3 museums: The Art Museum, The Maria Teresa museum and the Natural History Museum.

I miss took “natural history” for “national history” and we ended up going to the natural history museum. It was nice, but a pretty far cry from the Smithsonian one. What was really cool about the place was the architecture and extensive (3 rooms full) mineral collection. Again, no pictures.

At about 7, we went to a concert. The concert was in a small room in the Palais Schönbrunn, performed by the Vienna Baroque Orchestra. These people are AMAZING. They managed to make 2 violins, 1 viola, 1 cello, a bass and a piano sound like a full orchestra. There were also 2 sopranos who sang on some of the pieces. Totally worth the 42 euros.

So that’s it for Vienna- I’ll be back tomorrow with Munich!!