Hi!! Sorry for posting so late; it’s almost time for this week’s post. Anyways, quick update: As it turns out, AP world is not as much work as I expected, and neither are my other classes. YAY!!! More time for food!!!! Also, XC season started. Other that that, the week was pretty normal, until Sunday that is. Here’s what’s up:

Business started at 10am. Literally. My mom and I headed out to attend the first meeting for the SAGE (Students for the Advancement of Global Entreupreunership) business competition (read more here). It was at this really cool meeting place near East Nanjing Rd called The Naked Hub

So, after 2 very fast and informative hours, it was  time for lunch. We headed towards the subway stop.  A subway stop is a strange place for lunch right? Not if the stop is adjacent to a 3 story food court. Especially not if that food court has one of China’s most famous Shanghainese dim sum places. Behold: Nan Xiang steamed bun shop 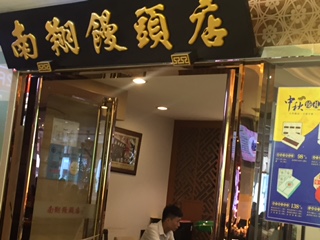 (I know, not the best pictures)

Nan Xiang Steamed Bun has been dishing out delicious, handmade dim sum, and other delicacies for over a hundred years. In fact, Nan Xiang, a small town near Shanghai, actually invented the juice dumpling. My expectations were high.  It was just my mom and I so we couldn’t order much. The decision was hard, but we made some pretty good choices. Here were the best 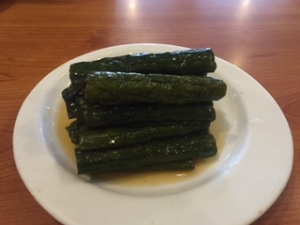 Marinated cucumber- Marinated cucumber is one of the first things I ask for at any decent looking restaurant. So, of course, I ordered it. It was well marinated but a bit too sweet for me. Apparently, that is authentic Shanghainese, so no comment on that.

Shrimp and pork Dumplings- These little guys were a bit of a disappointment, but their taste got them on the list. They had great flavour and texture, but many were deflated 😦 They were still delicious though, just not as good as I expected

Shepard’s Purse Soup dumplings- of course I saved the best for last. These little morsels of deliciousness were plump and juicy. Basically, fresh shepard’s purse (荠菜）is mixed with cubes of gelatin broth and wrapped in a perfectly elastic skin and steamed for eating pleasure. ORDER THIS!!!!!!

Another highlight of the restaurant was talking to the ladies at the window making the dumplings. They were so nice and actually told me to come back.

A family friend came to visit so we had to go out. We chose 捞王 in Lianyang Plaza. The restaurant is in a rather obscure corner, behind two other great restaurants, but its location didn’t stop it from being amazing. We ordered the classic mushroom and Chicken broth. PURE DELICIOUSNESS.

About those mushrooms…. the restaurant grows them in house, now that’s fresh.

（The lighting was terrible so sorry, no pics 😦

The delicious broth was accompanied by a myriad of meats, veggies and such. The waiter actually had a hard time fitting all our stuff on the cart. We will definitely be going back

At around 8, and totally stuffed, we dragged ourselves and our food babies back to the house. The end of a delicious day. How was your weekend?