Last post, I mentioned how we went to hotpot for dinner. Well, that hot pot place was DELICIOUS, so I decided to write it a review:

捞王(lao wang) is a relatively upstart hotpot chain that has taken Shanghai by storm. There are over 20 locations in Shanghai and none of them have less than 4 stars on 大众点评 （China’s version of Yelp). They are famous for their broth as well as their clay pot rice. We went to the Laya Plaza location

The restaurant is in a corner right between two other restaurants, so we didn’t even notice it until a family friend took us. As expected from a great restaurant, there was pretty epic queueing. Of course, the fact that it was a holiday didn’t really help the situation. We were lucky; there was only one group of 8+ before our turn. Nevertheless, we had to wait for almost 1.5 hrs. For the 1-5 table, the waiting list went from 44 to 79. The interior was rather Chinese chic: clean and modern, but with traditional elements

It was also quite loud, which is expected for hot pot. It ‘s a great place, but it’s location is at a bit of a disadvantage.

捞王 is a hotpot restaurant, so most of the food is just platters and platters of raw meats and veggies. (we ordered WAY too much meat)

The meat was very fresh and the house made tofu was to die for. There was also a huge selection of mushrooms. Unfortunately, they ran out of house grown ones

The items were great, but it is more famous for two things: The hot pot broth and clay pot rice

The hot pot broth is essentially just spiced pork bone broth simmered for 24 hrs. After, they throw in mushrooms, more herbs, pork intestines, and chicken. It’s soooo rich and delicious. It also comes in varying degrees of spiciness. We ordered the original. 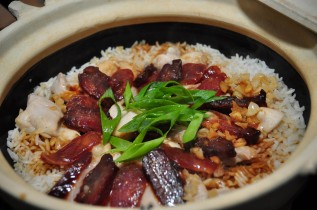 Clay pot rice is a staple up north. Apparently 捞王 does it just as good, or better. Basically, it’s rice steamed with sausage and cured meat, then mixed with oil and soy sauce. To be honest, I didn’t like it. The cured meat and sausage were strangely sweet and the rice was extremely greasy.

Most Chinese people find plain hotpot too bland, so almost every decent hotpot restaurant has a sauce bar. This restaurant is no different. 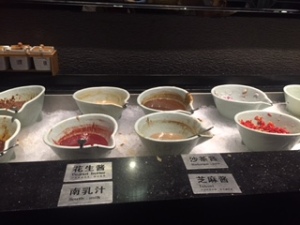 (Believe it or not, there are people who use chili sauce with their extra spicy hotpot)

I personally don’t like dipping sauces, but it’s cool.

The service was generally great. The waitresses were attentive and very helpful. They taught us how to properly cook the stuff and when to eat what item. Best of all, when we told them it was my dad’s birthday, they played happy birthday on the speaker.

My only complaint is that there aren’t enough servers for the huge demand, so some of our requests were pretty much ignored. Good effort though

I was very impressed by the restaurant and would love to try some of the other locations!