Hi!!! As of yesterday, I’m 17!!!!! I literally can’t believe I’m only 12 months away from adulthood! 17 is an awkward age between sweet 16 and official adulthood, but any birthday deserves celebration.

What a better way to celebrate than brunch at one of the best places in Shanghai? So, at half past 11, we set of for the Waldorf Astoria. Well, let’s eat!

The Grand Brassiere is one of Waldorf Astoria’s 3 restaurants. From Monday- Saturday, they offer breakfast, lunch and dinner buffets. On Sundays, they offer a special Champagne Brunch. For 488 RMB, guests get access to a buffet of fresh seafood, breads, pastries , cheeses and hot dishes. There’s also a bbq station and a la carte seafood dishes. For those who enjoy (and are old enough) to drink, an additional 188 RMB will buy free flow red, white and sparkling wine; an additional 288rmb will buy free flow champagne. Onto the food!

Note: Most reviews online will cite 688RMB, but the brunch changed a bit. Originally, it started at 11 with oyster tasting, but unfortunately, that is no longer available 😦

Based on the reviews, my expectations were sky high. Initially,  I was pretty disappointed by the lack of variety. 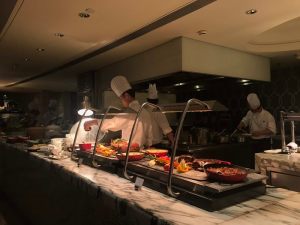 The single bar just couldn’t compare (at first glance) with the winding stations at some of the other places I’ve been. But never judge a restaurant by it’s cover, right? 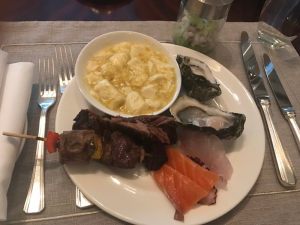 I immediately beelined for the seafood. The sashimi selection, although limited (only salmon, hamachi and octopus), looked particularly fresh. The main attraction; however, were the fresh shucked oysters. If I had my way, I would have grabbed a dozen on the spot, but the guy only shucked 3-5 at a time to prevent them from sitting around. Moving forward, I found some beef ribs calling my name and picked up a small plate of “crab tofu”. My initial disappointment immediately melted away. The variety may be limited, but the quality made up for everything.

The oysters were plump, fresh and flavorful beyond belief. I didn’t even need lemon, never mind hot sauce. The only oysters I’ve had that could compare were the ones at Hiroshima where we literally saw the fisherman bring them in. Yeah, these were that good. The sashimi was just as impressive. I’d honestly come here just for the seafood

The other items were also delicious. The rib meat was as delicious as expected- meaty and tender. Even though I usually hate sweet barbecue sauces, this one made a caramelized crush over the top that I couldn’t resist. The grill station came a close second. I ordered some chicken wing, sausage and salmon kebabs (both devoured before photo). All were grilled to perfection, especially the salmon. The meat literally melted in my mouth. However, as good as the meats were, all could have used a generous addition of seasoning

The brunch also came with some a la carte items: scallop, 1/2 lobster and 1 egg dish from a choice of 6 each. I was hoping to try the famous crab cake Benedict. Unfortunately, it wasn’t offered (maybe part of the same change that nixed the oyster tasting?). They did, however, have crab omlette, so I got that and my mom settled for a regular Benedict.

As with the buffet, the seafood stood out above and beyond. Both the lobster and scallop were incredibly fresh and sweet. More impressively, they were both cooked perfectly.

The egg dishes were honestly a bit of a let down. Both were underseasoned (a bit of a theme here). Technique wise, the omelet was spot on- tender, sweet crab rolled in a perfectly soft and buttery roll of egg. The poached egg on the Benedict was slightly overcooked, but my mom prefers harder eggs, so that turned out great.

The atmosphere definitely held up to expectataion. The high ceiling and open lighting really accentuate the elegance and grandeur. With that said, the small tables and intimate booth like seating kept the large room from becoming overwhelming.

The service was good, but a bit lacking. The wait staff were very courteous and attentive with keeping our glasses filled, but were slow with removing plates. There also weren’t enough of them to cover the large space, so it was a bit difficult to get their attention.

Overall, the brunch was amazing, but I kind of expected better. I probably won’t return, but highly recommend it, if only for the seafood

So, brunch ended at 2. Needless to say, I was absolutely stuffed. My mom and I spent the rest of the afternoon window shopping and ended this very special day with The Avengers: Infinity War. It was pretty much a perfect day!

I hope everyone’s week also rocked. Until next week, bye!

One thought on “Best Birthday Ever!!! Champagne Brunch at Waldorf Astoria”