Hi!!! I know this post is late but I’ve been busy. On Sunday, I participated in the International History Bee and Bowl China regionals. I didn’t really prepare, so I wasn’t expecting much, but I actually made it into the finals seeded second. Unfortunately, the Final was filled with US and ancient history questions, so I finished in an unspectacular 4th. Nevertheless, My mom decided it was occasion to celebrate and let me go the The Cook buffet.

The Cook is one of the three restaurants owned by the Kerry. (There’s the Meat- a crazy expensive steakhouse/event space, and the Brew- exactly what it sounds like). The Cook has an al la carte menu, but it’s limited, expensive and terrible. The buffet, although far from cheap, is a much better choice. Just be sure to come VERY hungry.

Although the selection is not the biggest, the diversity can get quite overwhelming. I stuck to my favorites: 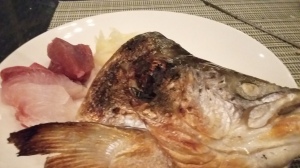 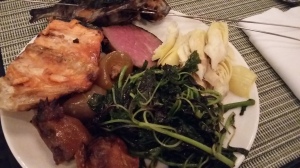 The char-grilled fish (The ones on skewers) were amazing. The guy actually grills it in front of you and he uses real coals. Some came out a bit too  burnt, but most of them were perfectly charred. The fish grill also does salmon, but the meat was dry. I was surprised that the offered the head. Salmon head irritates my stomach, but it’s irresistible.

I had been to The Cook a few times before, but they added a few , VERY DELICIOUS, items. They added a small Tai section. It had curry, roti, which I don’t like. Among those dishes was chicken tika- amazingly charred, perfectly spiced and tender chicken pieces. Next to the tai section, was a small corner with 3 dishes. There, I discovered stewed cow skin. Sounds gross? It’s not. It has the gelatinous, collagen texture of pork trotters, but far thicker and WAY less fatty. The dish was rich, slightly spicy and sweet. AMAZING. 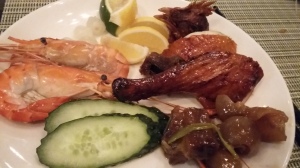 (My most disappointing plate)

Unfortunately, not everything was so rosy. The western section was quite lacking. I got what I thought was a perfectly cooked steak. While perfectly cooked, it was cold and bland. The roasts, with exception of the chicken, were also soft and greasy. I think the problem wasn’t so much the quality, but the fact that it had been left out- one of the downsides of buffets.

Buffets don’t really have service per say, but the servers were quick about removing used plates. I would suggest going a bit earlier. That way, you can avoid cold, sub par food. The restaurant usually pretty empty, but the bright lights and music keep it lively

On a side note, the buffet is expensive, a bit excessively so. It’s 298RMB/ person plus a 50RMB service charge.

Overall, the food, atmosphere, and service make The Cook a great place for a celebration or special event. I’ll definitely come back again and see if they have anything new next time.

One thought on “The Cook buffet at the Kerry”