H!!! Vacation is over; the relatives left and it’s time to get back to work. But… before school ramps up again, we decided to go on one more food adventure. Where? Well to the restaurant I’ve been waiting to try for the past three weeks 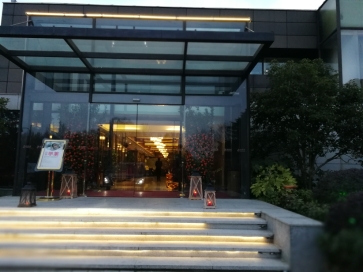 Chao Fu Guan is an upscale cantonese restaurant right at the entrance of Century Park overlooking a beautiful wooded area next to a small river. Of course we didn’t go for the scenery. It’s claim to fame in Shanghai (at least among locals) is its old marinated goose head, which diners can enjoy half of one to the tune of 580 RMB. Yep, 580RMB for 1/2 a goose head. How was it? Read on to find out!

Old Marinated Goose Head- The “dish of the night” was actually the first to arrive. I was pleasantly surprised when “1/2 a goose head” included the neck and a good amount of non- head meat. Taste-wise, it wasn’t too special. The meat actually resembled a very tender, stringy beef jerky. The highlight was the skin. They somehow managed make it thick, almost like a braised pork skin. While good, definitely not worth 580 RMB

Egg with Caviar- After the goose head, I choose a (slightly) more down to earth dish. Each egg actually had a fair amount of caviar, which added luxury and a delightful briny richness. My only complaint is that they removed the yolk and replaced it with strangely sweet breadcrumbs. 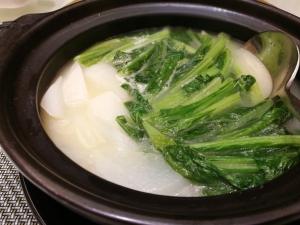 Radish and Greens casserole- Normally, I don’t mention veggie dishes, but this one stood out. First, the broth was amazingly umami and the flavor actually penetrated the radish. Also, more importantly, the greens developed an incredible fragrance and taste resembling fermented tofu. Given that we spent the last week pigging out on oily, salty meats, this dish was the perfect break.

Sizzling Beef Short Ribs- This is another dish I typically avoid, but my dad needed meat. As expected, it was mediocre. The dish cost 138 rmb but tasted no different from the cheap version offered at sketchy roadside restaurants.

Note: Chao Fu Guan offers a wide variety of high end soups and stews ex. sea cucumber and fish maw. It also has a pretty extensive “to order” seafood menu where you can choose from a variety of seafood and preparation methods. Both options would be perfect for a special occasion gathering or even date, but we didn’t go that route. They also offer dim sum brunches for more casual occasions

The service and atmosphere were both top notch. The interior oozes with elegance. The restaurant really captured the demure serenity of a very wealthy traditional Chinese household. We got especially lucky and were given a cute private room on the second

For bigger celebrations, the first floor has a gala hall and private rooms go up to 15 people.

The service matched the elegant atmosphere. The wait staff were not only courteous, they actually led us to the door and offered to take our takeout bag to the car. They also periodically replaced our towels and never let our glasses run dry. My only complaint was that the food arrived fairly slowly and sporadically. The goose came within 10 minutes, but the rest of the dishes took more than 40 (in total). We were often left waiting awkwardly for the next dish

Overall, Chao Fu Guan is a good restaurant. It’s beautiul, upscale food and atmosphere are perfect for important gatherings. However, although the food is good, it is WAY overpriced. I’ll probably won’t be going back anytime soon, but I thoroughly enjoyed the dinner