As promised, I’m back with a very special restaurant review. My parents made reservations at Tang Court to celebrate the new opportunities I’ve been given.

Tang Court is a fine dining Cantonese restaurant on the 5th floor of the Langman hotel in Xintiandi. What makes it so special? This.

For two years, it’s held the honor of China’s first 3 starred restaurant. Unfortunately, it was most recently demoted in favor of Ultraviolet (coming in the very distant future), but the fact it held the title – for two years!- makes it the first three starred restaurant I’ve gone too. I honestly can’t believe my parents agreed to treat me to this.

Needless to say, expectations were through the roof. Let’s eat!

We were booked for lunch and showed up at 11:30 sharp. The lunch menu is amazing, but is definitely much more limited. Also, winter means no seasonal vegetables, so many of their more unique dim sum items were off the table. With that said, we got to taste quite a few of their amazing dishes 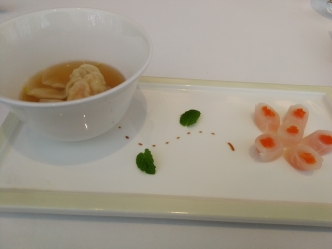 Shrimp wonton with Pickled Radish- This beautiful, delicate dish showed up as a “pre- meal appetizer”. It was AMAZING. The skin was unbelievably thin yet snappy. The filling was nothing short of an umami bomb featuring tender, fresh shrimp napped in fatty pork that brought an incredible richness without overwhelming the palate. More incredible were the pickles- thin strips of radish rolled around finely julienned carrots-  the perfect pop of acidic sweetness. I guess this is what it takes to get three michelin stars 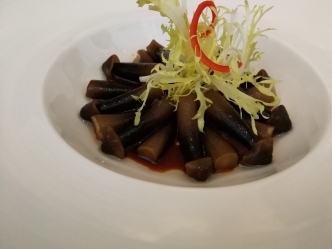 Pickled Mushrooms- Considering how phenomenal the pickled radish was, I could not resist trying this dish. I made the right decision. The mushrooms themselves had an incredible, fresh earthy taste. The vinegar and sugar marinade rounded out the slightly sharp earthiness while the oil added a rich medium that carried and enhanced the flavors without even a hint of greasiness

Special Fish Maw Soup with Meat Floss- My mom loves a great soup and of the 7 options, she chose this one. Good choice to say the least. While it doesn’t look the most appetizing, this dish was nothing short of an umami bomb featuring a delicate seafood flavor enhanced by a rich porky flavor . Fish maw itself had no flavor but adds collagen, thickening the soup. The strips also added a poppy textural element.

Har Gao- Shrimp dumplings are a dim sum must order, and Tang Court’s certainly didn’t disappoint. Needless to say, the shrimp was more than fresh. The skin was the shocker. It was glutinous and chewy but snappy. More impressively, it had the fragrance of fresh rice and was probably made minutes before steaming. With that  said, I with there was some bamboo shoot or water chestnut to add a textural element. 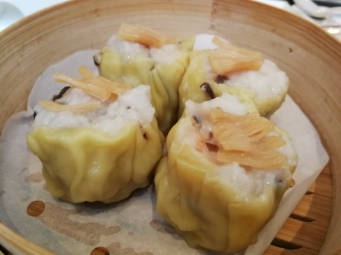 Shrimp Siu Mai- Siu Mai is a true test of  dim sum quality and Tang Court passed with flying colours. The filling struck the perfect balance between the fresh umami of the shrimp and the richness of the pork mince. To top everything off were delicate slices of fragrant abalone. Like the Har Gao, the most impressive aspect was the skin. Thin yet elastic and miles above the soggy, sticky, greasy varieties so common to mediocre restaurants.

Kunekune Char Siu and Suckling Pig combo platter- Roasts are a must at any Cantonese restaurant, so I made a beeline for the combo platter. It blew us away. First, the meat itself was tender, yet retained a nice chew. Each bite added more of the sweet, smoky, pork flavour. The meat itself was quite lean, but featured lines of thin marbling. More impressively, the sauce was sweet, but not cloying such that it cut through the richness. The char siu was good, the suckling pig was better. The skin crunched like a porky chip and featured a fine layer of perfectly rendered fat underneath that creates a juicy after taste. Unlike many roast pigs, the meat itself was chock full of flavor and, again, had the amazing marbling. I only wish the portions were bigger

Roast Goose- While the char siu and suckling pig were phenomenal, the goose was quite a disappointment. To start, the skin was quite hard, but not crispy. In addition, the fat wasn’t properly rendered so each bite overwhelmed the palate with a burst of unflavored grease. Even worse, the meat was tough and overly gamey.

Note: Tang Court is actually more famous for its crispy skin chicken. Unfortunately, they only offer it in halves, which would have been too much 😦

Water Spinach in Soup- Normally, veggie dishes aren’t anything worth mentioning, but this dish stands out. The spinach itself had a fresh earthiness that cut the indulgent richness of the roasts. The ham broth brought a powerful deep punch of flavour that mellowed out the natural bitterness. While I thoroughly enjoyed this dish, my mom did not particularly like the strong flavour and found the leaves tough.

Birds Nest Soup with Crab Roe- My parents allowed me to order whatever I wanted. Tang Court is famous for its ridiculously expensive lobster dishes and some stir- fried Wagyu, but those aren’t really my taste. With that said, I did choose this one indulgence, and I don’t regret it one bit. The dish was layer after layer of umami with an incredibly rich, perfectly seasoned crab roe broth. The birds nest soaked up every bit of this broth and added a delightful bouncy mouthfeel. Just when the umami was bordering overwhelming, the sweet chunks of crab roe and touch of white pepper cut through to cleanse the palate 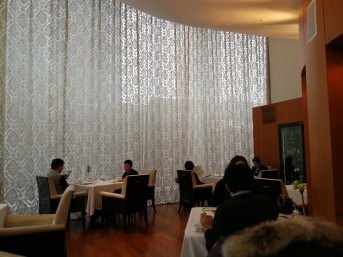 Tang Court is definitely a restaurant best left for special occasions and VIP guests. It simply oozes elegance, and with only 20 seats in the main hall, is practically reservation only. The other 90 available seats are split between 8 private dining halls. We considered booking one, but the minimum is 5 people and we would have been stuck to a set menu. With that said, it’s not black tie either- business casual is enough. The calm, elegance, combined with the beautiful lighting of the expansive windows really highlighted the three star experience

Service, however, was a bit underwhelming. The wait staff was more than courteous and obliging and definitely deserved the service charge, if not more. However, the service was unforgivingly slow. The appetizers came out quickly enough, but the other dishes left us wondering if the restaurant forgot our orders. I understand slowing the pace to enjoy food, but waiting 20+ minutes between dishes is excessive

Overall, Tang Cours was an amazing experience to say the least, but I don’t think I’ll be back in a very long while. It didn’t feel worth the cost, in terms of money or time spent waiting awkwardly for dishes to arrive.