Hi!! No adventure this week, but don’t click out! Why? Well, I’d be sad for one thing. More importantly, this just isn’t just a meet up

But first, what is Little Moochi?

Little  Moochi is a company with a mission. It began a year ago with a diverse group of CMU entrepreneurs who found that getting their kids to eat broccoli was harder than their MBA Capstone projects. Rather than engage in a futile struggle, they put their heads together and… discovered a cheat code! Why not turn healthy eating into a video game! They created an app that made healthy eating fun by allowing kids to raise a virtual pet

As a result of the team’s tireless efforts, Moochi quickly evolved from an idea that scored 1/5 in a start- up competition to a fast growing startup that’s placed top in 3 prestigious venture competitions and partnership with pediatricians at UPMC.

While success is great, let’s be honest- the best development was a cuter Moochi:

In August, I was browsing the Tepper website and came across their website. As someone passionate about health and fitness, I was immediately drawn to them. When I found out that the CEO was from Shanghai, I HAD to get involved. Turns out, they were looking for someone to do some promotional writing. A perfect match!

Well, yesterday was Moochi’s first birthday and the team invited me to celebrate the incredible growth 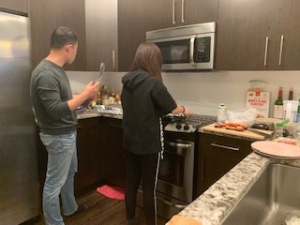 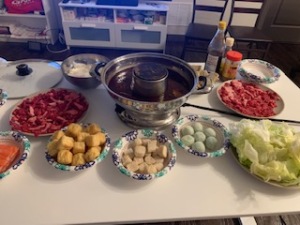 While the food was delicious (seriously! the knife work on the beef was incredible), the best part was definitely bonding with the team over life, Moochi and Ringfit hacks  Hint: Move the controller, not your body 😉

With such a strong team, Moochi is looking towards a bright future. They’re wrapping up Beta Testing, so keep your eyes peeled for a cute, veggie loving creature in the App store!

Cheers to a cuter, healthier future! Until next week, Bye

3 thoughts on “Celebration with Little Moochi!”